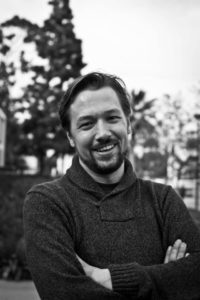 Jamie King is a writer and producer of film and television.

Jamie grew up in Washington State and studied theater at New York University, going on to write and perform at venues like the UCB Theater, the Montreal Sketch Comedy Festival and the Second City Theater. He received his MFA in Writing and Producing for Television from Loyola Marymount University, where he created THE REAL HOUSEWIVES OF SHAKESPEARE, written entirely in verse. After graduation, Jamie landed a job as an assistant on MARVEL’S JESSICA JONES, where he was promoted to Staff Writer in the first season. He returned as a writer for seasons two and three, and has credits on five episodes of the series, including the season one finale, “Smile,” written with Scott Reynolds and Melissa Rosenberg, which earned a Hugo Award.

Jamie wrote the horror feature LIVESTREAM for Legendary Digital, and contributed to the Avengers Video Game from Square Enix. His pilot CASTLE ROCK won best teleplay at the 2016 Slamdance Film Festival, and he wrote for the second season of IMPULSE on YouTube Premium. He is represented by Dino Carlaftes of the Kaplan Stahler Agency and Ryan Nord of The Nord Group. His writing samples are available here. He lives in Studio City with his wife, son and daughter.